1,339 Quite Interesting Facts to Make Your Jaw Drop 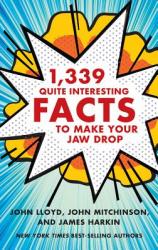 From the creators of the hugely popular BBC quiz show QI, a brilliant sequel to their New York Times–best-selling 1,227 Quite Interesting Facts to Blow Your Socks Off.

1,339 Quite Interesting Facts to Make Your Jaw Drop is bursting with mindboggling morsels of trivia—informative, hilarious, sometimes arcane or utterly useless, but always entertaining.

• There is a cult in Malaysia that worships a giant teapot.

• Your eyebrows renew themselves every 64 days.

Every fact in this magnificent little volume has been researched with punctilious care in order to bring you the truth in its purest form.

This feature require that you enable JavaScript in your browser.
END_OF_DOCUMENT_TOKEN_TO_BE_REPLACED

This feature require that you enable JavaScript in your browser.
END_OF_DOCUMENT_TOKEN_TO_BE_REPLACED